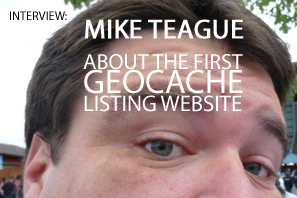 Back in 2000, when the first geocache had just been placed, there was a need for a website that listed all the new caches that appeared. Mike Teague was the first to set one up. How did he do it, and what are his thoughts on the development of the hobby since then?

Awesome Geocaching: Dave Ulmer placed the first geocache, and many others were quick to follow. You started the very first geocaching listing site. Can you tell us about it?

Mike Teague: It was a simple html page I added to my personal webpage. I figured a central list might be handier than everyone interested having to comb through postings on the usenet newsgroup [sci.geo.satellite-nav] to find new geocaches. I didn’t expect it to grow as fast and as big as it has.

AG: Jeremy Irish took over the listings only months later. Why?

MT: Simply because it was getting beyond my ability to handle. I was writing the html by hand in a text editor, which was easy enough when I’d only get a couple of new entries a week. But it was getting crazy, I couldn’t keep up. Also, people seemed to be looking for some sort of official direction from me, and I didn’t think I should be making “rules” just because I made a little webpage.

AG: So you had the possibility of shaping geocaching as we see it today, but passed it up?

MT: Well, the fact that I could decide what I posted on my page, by default, had me making “rules”, which I was not comfortable with. This is another reason I was happy to give up doing the webpage.  If I was still doing it, it would be physical caches only, there wouldn’t be stuff like travel bugs and coins and whatnot. It would be a lot different, more basic, and I doubt as popular.  I think all that stuff they’ve come up with is the reason geocaching grew so much beyond a small group of GPS geeks hiding ammo cans in the woods.

AG: What was your relation to Jeremy?

MT: None at all, he just sent me an email one day and invited me to check out his – much better – website. I said “go for it, it’s all yours!” and breathed a sigh of relief.

AG: Since the start, you have only logged 5 caches in more than 12 years – how come? Not into the sport?

MT: I got kind of spooked because back around that time there was a geocache that got checked out by a bomb squad. The ruling from the park service or forest service was that geocaching was not allowed. That played a part, and that at the time I was broke. Also my car was no longer reliable enough to take me where I liked to do geocaches, up in the wilderness. So I pulled my last remaining geocache – which was in a public park. I’ve logged one recently, but I keep forgetting to get back into it more seriously.

AG: There have been several bomb scares since, but geocaching is no longer banned in most places. Why do you think that is?

MT: I have no way to know for sure, but the popularity must have something to do with it. I’m glad to hear bans have been reversed though! Good deal!

AG: What’s your opinion on the development of geocaching since it first started until today?

AG: Would you change something if you could?

MT: I insisted on a “physical geocaches only”-requirement to list on my webpage, and I would not so much have done so . It caused an early rift in the community. This is why Dave Ulmer is some sort of taboo name. That and that he got weird because I quit doing my site, and let Jeremy “take over”. I got the idea that he didn’t like the idea of Jeremy making money from the sport, but what did he expect, someone like me to quit my job and maintain a website full time? I did what I thought was best. And the terms “handing over” or “taking over” aren’t fair. All the listing information was public, all I did was stop maintaining mine and Jeremy started a new one. I told everyone “I’m not taking any more listings, give ’em to Jeremy if you wish.”

AG: And that was frowned upon?

MT: Only by Dave Ulmer, I think. I don’t remember anyone else having problems with it. But I had no copyright on any of it and anyone could have just copied the info and started a site. Jeremy was just the first one to do so.

AG: How involved do you think you’ll be with geocaching in the future?

MT: I intend to get back into it a bit more. I’m no longer broke, and finally I have a new car. But I have a new hobby which really requires time: golf!

AG: Golf, huh? Are there any similarities between the two hobbies?

MT: Well, I get to be outside and walk around. And sometimes looking for my ball in the rough is like when your GPS is saying you’re on top of a geocache and you still can’t find it.

AG: Finally, I have to ask: what’s the best geoacache listing site today?

MT: I’d have to go with Jeremy’s site, geocaching.com, simply because it’s the only one I’m aware of! No offense to any others!

Thank you Mike for the lovely chat!