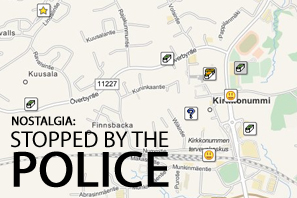 One day I turned nostalgic in a way I guess most of us do every now and then. I started floating around in Google Maps, visiting places I’ve lived in and cities I’ve visited. And that, in turn, led to other thoughts: the first geocaches.

My first 150 caches, plus/mi­nus a few, were found in and around Helsinki and Kirkko­nummi, Finland. The very first one was found together with my girlfriend of the time, with­out a GPS. We climbed around underneath an old wooden bridge built for Russian tanks during the second world war. And we were very fascinated with the box we found!

Since then, there are count­less trips I remember. One was with a friend in a suburb of Helsinki. And another in Helsinki when we had rela­tives visiting. Instead of going with the others to the must-see sights, I went on my own to a billboard on one of the main streets. I found noth­ing, but the relatives suddenly couldn’t care less about sights and everyone set their mind to finding the cache. We weren’t very discreet at the time, so it must have looked extremely odd when ten or eleven people simultaneously tried to stick their heads behind the bill­board.

Another memorable exper­ience in Helsinki was when I was stopped by the police. I was walking back and forth across a street trying to get a signal. Then I stopped at a sign, took out a black box, opened it, put something in and put the box back. Odd foreigners, they must have thought, when I explained what on earth I had been doing.

In the forests of Kirkkonummi, the small town out­side Helsinki where I lived, I stumbled upon a deer that scared me half to death, walked around alone in the cold and dusk with my GPS – and had the time of my life!

In Kirkkonummi I also hid my first cache. And it was dur­ing a maintenance round of that cache that I met my first geocacher. He hardly spoke any English, I no Finnish. Yet we managed to communicate just fine anyway.

How did it all start for you? Send us your story, and have it posted here on Awesome Geocaching.