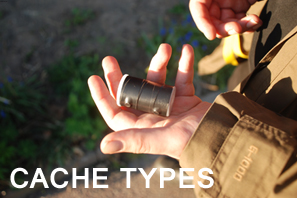 There’s an ocean of different types of caches – represented by different icons on the website. From the traditional “here’s the cache, come and get it” to advanced puzzle caches that make a both mental and physical challenge.

The most common cache type. No strings attached, puzzles to solve or irregularities to be found – just come and find the cache.

A cache with one or several “stages” that need to be solved in order to get to the final container. Usually, stage one contains the clues to stage two, and so on.

A cache with an element that has to be solved (such as a riddle) to find the cache. Mystery caches can be very creative – this is the cache type with the least restrictions.

A cache related to the geology of our planet, placed on important sites. They tell the story of how earth has developed and may contain related questions.

Wherigo is a system where interactive GPS stories are made. When arriving at a specific location, an event occurs in the device taking the story forward. The most technological cache type.

Letterboxing is a hobby of its own, where treasures are found using clues instead of coordinates. In some cases these overlap with geocaching and the boxes can be found as normal “traditionals”.

An event is a pre-set location and time where geocachers meet. It can be a small gathering or big happenings with hundreds of participants.

A mega event works like a regular event, except there are at least 500 participants. These events are usually very well organized and feature major activities.

During a CITO-event geocachers gather to clean a specific area of trash. They work as regular events, except focus lies on the trash. CITO stands for Cache In Trash Out.

Archived caches can no longer be created. However, webcams and virtuals do still exist – old ones have not been removed and can still be logged.

Instead of finding hidden caches at specific locations, locationless caches are objects that can be found anywhere in the world.

Around the world webcams are placed, usually in major cities. The goal is to wave at the camera and save the image seen through the camera online.

Virtual caches are caches in the form of places, not physical containers. They require the performance of a task, for example taking a picture or answering questions.