In the year 2000 I visited the Danish island of Læsø for the first time. In 2009 I returned. On inline skates. To geocache.

The first visit was a school trip. I was ten years old, had just moved to a new country where I didn’t speak the language, and had only been at my new school for a few weeks. Talk about putting a child through psychological pressure. No, the little I remember from the trip are only good memories. It was a fun way to get to know my new classmates.

And almost a decade later I returned. This time in the form of a boat trip with the family. The island was on our “to visit”-list for quite some time, and now it was finally happening. The purpose: a relaxing trip and – of course – some geocaching.

Now, I could go on about how great the weather was and that the sea was calm, how we had lunch in the harbor, that there were a lot of tourists, and blah, blah, but that’s the boring bit. Let’s fastforward to the geocaching.

Geocaching on Læsø – let’s write it “Laso” from now on for the sake of pronounciation – is probably best done by bike. A car when being a tourist is for the lucky few. But we chose a different approach: inlines! Not as practical, but for me, who loves inlines and is not too fond of biking, it was the obvious choice.

Laso is in fact one of the best places I’ve been rollerskating in. The Danes are very good at maintaining their roads, and even the tiniest sideroads that would elsewhere consist of gravel are instead paved. And since you rarely go by car to this island, the roads are low on traffic. Plenty of room!

The island is actually quite large. To be able to quickly get around to some of the caches, we brought our rollerskates.

Oh yes, geocaching! Of the 15-16 caches on the island at the time, I logged five. This was on the eastern side, by what’s known as Osterbyhavn. And who was at the top of each logbook? My Swedish friend TimTim GO, of course, known in Sweden for having logged hundreds of FTFs. Together with Gavia, AskThomas and j-annie he flew to the island in a private airplane not long before I came there.

Quality-wise the caches were of a similar scale as those in other countries in this part of the world. In Sweden, there was a lot of talk at this time on various forums about the differences in how caches are placed and rated. I was surprised to learn how little difference there actually was. Most fun, however, was to read all the Danish logs, especially since several years had passed since I moved back to Sweden.

Speaking of that, the entire island had a feeling of “Denmark” to it (well, duh) due to a number of factors. The language is one of course, the landscape is another. Sweden has mountains and elevation differences. The highest point in Denmark is the top of a bridge. The rest of the country is, well, flat. But the little details also played their part in bringing back some memories. The way the sidewalks are built using patterns of brown tiles rather than pavement and the characteristic red and white town signs, to name a few examples.

The day ended with a short stroll to one last cache, followed by a well-deserved ice cream. Then we steered the boat back home, a trip of about one and a half to two hours, to an even more well-deserved shower.

I will most definitely revisit Denmark in the future. If not for the great inline opportunities, then for the cool geocaches and the nature. Laso is incredibly beautiful, but a different island in the same sea is Anholt. A bit further away, but from what I’ve heard truly worth a visit. And there the caches are even more famous! 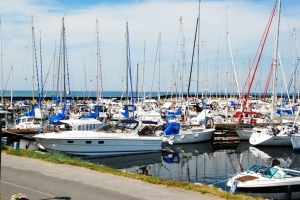 We arrived here, in Osterbyhavn on the eastern side of the island. Our tiny boat is outside the frame, though.